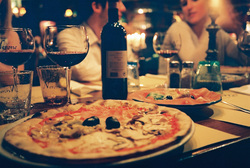 Best Pizza in the City?
Ah, the age old question; who has the best pizza in the city? I could tell you where NOT to eat, but we'd be here all day. I'll never forget the first time Christopher "dragged" me (as he so lovingly puts it) to Jo Jo's Famous NY Style Pizza & Subs. It had been a particularly rough day for me and when asked what I wanted for lunch I practically growled "pizza" because what cheers you up more than delicious melty cheese?

"TRUST ME" Christopher's insistence was almost annoying. Seeing as he was born and raised in New York, Chis and I sometimes have... different ideas on what defines a good piece of pizza. He can thank me for introducing him to ranch as a dipping sauce! Gotta love the South. But as you all know, I am a BIG fan of whole wheat, local ingredients, pile up the veggies... but Chris told me to put those ideals on hold. "It's pizza for crying out loud". Okay, so as I mentioned, it was a grumpy day. I walked in and immediately started making snark comments about the decor. Big posters of the New York City skyline, plastic everything, and more pictures of New York when I turned my head. "I get it, we're supposed to be in New York" I thought sarcastically. I wasn't about to admit how amazing it smelled.

I sit down and Chris brings me a slice of pizza so big that its being supported by two paper plates. I follow his lead and sprinkle Parmesan and garlic powder all over my considerable slice of super greasy pepperoni pizza. Now I hate to admit being wrong. But what happened next was involuntary. "OHHHHH my god. This is amazing". The words shot out of my mouth without warning. This pizza was divine. Paper thin crust, cooked to perfection and full of flavor. Just enough cheese to satisfy your cravings but not fall off the slice. The pepperoni was the perfect balance of savory and spice, I was in heaven. I got up and grabbed another slice from the enthusiastic man behind the counter, "Eh, I think she likes the pizza, Chris!" Apparently they're on a first name basis, does everyone from New York know each other? I didn't care, I ordered a slice of artichoke white pizza this time and left Jo Jo's with a skip in my step in time with Chris's chorus of "I told you so's".

THE VERDICT?  Delicious! Very authentic New York pizza according to my very authentic New York fiance. The atmosphere isn't great but that's not what you're there for. ﻿You﻿'ll b﻿e too busy stuffing your face to even look up from your paper plate to notice.
INSIDER TIPS Go early! This place gets busy quick. It's cheap, fast, and amazing AND it is first come first serve. Get there before the lunch rush to assure a fresh, delicious slice of za (Chris is glaring at me as I type that, apparently they don't say za in NY!). 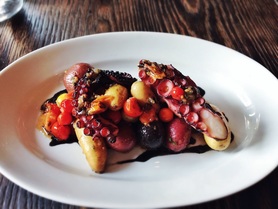 What is the deal with Graffiato?
Around this time last year I went up to D.C to visit a couple of friends and found myself in heaven by the name of Kapnos. Always a sucker for good Greek food (the most underrated cuisine in my opinion!), Mike Isabella's D.C location hit the nail on the head. I was absolutely blown away, and it wasn't just because of the entire bottle of rosé I drank by myself. Needless to say, I was more than excited to hear that Richmond was going to be getting a Mike Isabella restaurant of our very own earlier this year.

Chris and I had what we called a "grown up date" planned out. Usually a six pack of Stella and the hokey game or a Netflix marathon counts as quality time together with our busy schedules. But Book of Mormon was in town and we made RESERVATIONS at a nice place for dinner with plans to get drinks at a DIFFERENT LOCATION afterwards! I know. We're the swankiest. So we arrive at Graffiato with a 5:30 reservation (doors at the Altria Theater opened at 7, we don't normally partake in the early-bird special) that we made an entire month in advance. Why am I telling you all this? It comes into play. Anyway, we're there at 5:30, super excited for our fun night out on the town. The hostess greats us with a delightful smile and proceeds to escort us about 3 feet from the hostess stand to a tiny 2 top table right next in front of the door.

Now I try not to be picky when it comes to stuff like that. But I've worked in restaurants for years as has Chris, and this is clearly the crappy table that no one wants that they keep on hand for walk-ins when its super busy. And I know that its going to get busy! It's the hot new restaurant in town! But as I scan the completely empty dining establishment at the ripe early hour of 5:30 I can't stand it. "I'm so sorry, I know this is probably annoying but can we not sit here? We've had a reservation for a month... it's like our only night out together and I really would prefer something further back away from the door" as I say it I can feel the hostess stabbing me with her pen in her mind. She walks us over to a booth along the window in a huff, dramatically rearranging the seating chart in her hand.

Not off to a great start. We feel super awkward and the hostesses are staring daggers in our direction, subtlety clearly not their goal. Our waitress comes by and hands us drink lists. She has to run back to the bar several times to ask the bar tender the questions we were asking her about their signature cocktails. Having an uniformed server can be pretty irritating, but we gave this young woman the benefit of the doubt. After all, I am of the belief that not unlike the Israeli army, a year in the food service industry should be mandatory for all US citizens at age 18. It is one of the most difficult, tiring, and at times demeaning jobs out there (whoever said the customer is always right should have to serve eternity in customer service).

Maybe we already had a sour taste in our mouths after the unpleasant welcome into the restaurant, but between never seeing our waitress again after she got our drinks, food runners hurriedly sliding our dishes on the table and darting off before any questions could be asked, our food just didn't seem that amazing. "I can make better pizza than this at home..." Chris muttered after a road runner tossed a pie with a few wilted arugula leaves on it.  "Also if I'm paying 11 bucks for a drink, I expect to get some sort of buzz on." Needless to say we left unsatisfied, convinced that we had just been punished the entire meal for asking to be sat away from the door.

﻿THE VERDICT?﻿  If you go here get the grilled octopus. If you don't go here,  eh.
Special thanks to my sponsors, Balance 4 life Chiropractic,  RVA Pest Control, RVA Paving, and QT Office! Keep business local!